You most probably heard the name “Steven Covey” and his bestselling work named “The 7 Habits of Highly Effective People”, but like most others, you haven’t got some time to read the book yet. Here I did the work for you and have put 7 Habits of Highly Effective People Summary  below, give it a quick read to decide if you want to read the full book or not –

There are 2 kinds of people. First one is reactive, and the other is proactive. Most people in this world are usually reactive kind and the very first habit we have to form, as per Covey in his book, is to become proactive. 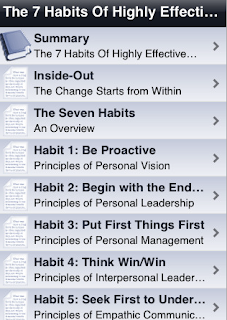 We, humans, are different than other creatures on this earth. The difference is not in our shape or appearance or in language or in intelligence, it is in our ability to control ourselves and the situation around us and in our ability to bend the reality the way we want it to be. We humans can take charge, and we can write our own script. Every human being has this ability to direct his own life the way he wants, like an Oscar winner director direct a masterpiece the way he wants.

It’s fascinating that most people choose to stay reactive when they have this ability to become proactive at their will. The reactive people don’t take charge. They don’t take responsibilities of their own actions. They think and feel that they have nothing to do, everything is happening by either nature’s will or by God’s wish or just due to his own fate! They don’t believe that they can make things happen; instead, think that things just happen to them and nothing they can do that will change the situation. Their belief is so deep-rooted that they live in a false sense of satisfaction, and mistake that to be some kind of success!

We all see people around us who work a small job every day till his death, who married the first girl nodded to his proposal, who believes his father died of cancer by God’s wish – these people usually live a happy life! They work the same job in their whole life, they go to the same bar to drink the same whiskey with the same people every Saturday night. They go on vacation with the same budget every year, hence most of the time they either go to the same place or similar places in every holiday. Have a look inside you, try to do an impartial judgment of your own self – try to be a little harsh on your self. Aren’t you that guy we’re talking about? Did you identified yourself already and realized that you’re that “reactive” person here!